Taste and aroma elicit amazing sensory memories for me.  The other day we drove across Broadway street in Newton, KS and passed a tiny store called Gillespie's Meat Market.  I've only been there once, and that was to purchase a "ham loaf" for Thanksgiving.  Now to be honest I'd never heard of a ham loaf fixed like meat loaf, but I became an instant fan of the meal after serving it oozing with juices that soaked up the dipping bread and blended with the new potatoes and green beans.

Another memory, I thought lost until we passed that store, sits in my heart.  Simply put, as a child I lived on fresh ground "ham spread" sandwiches from Bob Hill's Grocery on the corner of 3rd  and H st. N.E. in Miami, Oklahoma.  I was eight years old when we moved to 209 H. NE and a responsible 4th grader, or so my mother convinced me.  I could walk to the store less than a block away with money in an envelope and buy groceries.  The list was never more than I could carry.  The first step into the store released a sense of fresh air and a wetness in the air when I turned to the left and walked by the fresh fruit and vegetables.  There was just something about the citrus smell of the orange and banana crates that  filled my mind with pictures of palm trees in sunny California or perhaps Brazil. I'd walk by the fruits just to smell them even if they weren't on the list.

My favorite trips were when I carried a dime and a nickel and walked to the back of the store and asked Lon, the butcher, for 15 cents worth of ham spread.  I stood nearly eye level with the butcher case of meats.  Everyday he ground up fresh ham and added relish, mayonnaise, celery, and other spices to the ground ham.  Then he neatly packed it into a long row lined with green paper trimmings to separate  it from the other meats.  Lon towered over the butcher case and peered down at me and asked, "What can I get for you today, little girl?"  I would look up and say, "My name is Letty.  I'm not a little girl."  Then he'd grin really big and laugh and say, "Oh, how could I forget, you've been here before."  It was a game we played and he always made me smile.  I'd look up at his ruddy wrinkled skin, fading blue eyes, curly sandy blond hair and big teeth and say, "I'd like 15 cents worth of ham spread today, please."  Then my grin would spread across my face in anticipation of running home to make my sandwich on white Wonder Bread with heaps of  lettuce.  I would stand and watch with fascination as Lon scooped up the meat, weighed it to the penny, then pulled the  butcher paper off the rack and placed the meat on the slick side of the paper.  Very meticulously (a word I later learned to describe him) he'd fold the paper across the top, roll it, fold one side in, roll it, fold the other side in and roll one last time before he taped it and then in handwritten letters wrote out $.15.

I'd run home, grab the bread and plop the ham spread onto the white bread, tear off a lettuce leaf, the greenest I could find, set it on my sandwich then smash the sides together.  That way I could lick the oozing ham as it drop off the sandwich.  With my glass of milk I could then set up a T.V. tray and walk into the living room to watch T.V. while I ate my sandwich.  Black and white T.V. and sandwiches on white gluey bread, life was good as an eight year old.

My mother used to call those cravings a stage I was going through, and she rested assured thanks to Dr. Spock that I would out grow my desire for ham spread sandwiches and learn to eat other healthier foods.  Of course, my mother and Spock were correct.  I outgrew the ham spread sandwiches, and later the canned spaghetti, and for a few years I outgrew the memories.  Now, I think I'll make a trip to the meat market and buy some ham.  Along the years of growing up I bought an antique meat grinder and secretly learned to make my own ham spread.  It's time to make some more for lunch and perhaps a toast to Lon and all those people at Bob Hill Grocery who made time to smile and recognize a little girl by name.
Posted by Anonymous at 11:24 AM 4 comments:

Meet the queen of "excessive moderation."  This is not a new term for me nor a new idea; I've done it for years and most generally paid for it with my health as in this last two weeks.  I thought it best to define my term and then my mind wondered as I jumped from definition to thesaurus to new word then back again. Somewhere there's bound to be a little humor in this story.

Excessive is defined as an amount by which one quality exceeds another, when my eyes and hand wrote down "quality" instead of quantity I knew the joke was still on me or Freud.  Now moderation is a word and act I really respect and would like to model more in my life.  In essence it means to lessen the intensity or to avoid extremes.  It is so much easier to define the words than to live them.

So here I sit coughing, sniffling, and hobbled with a foot issue called "plantar fasciitis" all because of "excessive moderation."  It began when I was a child, but then so did all of my good and bad habits.  On January 1st  this year I decided that my body now needed yoga to help me relax and stretch this foot.  I began with "hot yoga" for 90 minutes at Genesis and loved it.  The next day I went to another yoga class, then next day two yoga classes and my body was happy, albeit slightly sore.  Then I went to my favorite workout--Pilates, at Core Connections.  Thursday was warm and sunny in the heart of Kansas so I took the dog for a walk.  However, I walked too far south (it may have been a yearning for a warmer climate) and had to turn around and walk back the distance home.  That's when the hobble began.  My body began to break down and argue with me all of the way home, how dare it do that when I was so enjoying the weather.  Three days later I had read another book, sat with ice on my foot, soaked it in Epsom salts, caught this passing cold,  and let my aching body heal.  Hump!  Excessive moderation won.

This time I may have been humbled or hobbled enough to teach my excessive spirit that moderation is the key.  We'll see.
Posted by Anonymous at 12:53 PM No comments:

The Beatles and Me

August 1967 my father drove me to LSU in Baton Rouge, Louisiana in a blue Ford station wagon, to begin my Junior year of college and first year away from home.  I was a highly energetic exuberant determined, if not a bit feisty, 19 year old girl, who planned to change the world, if not conquer it along the way.  But, of course, I was lacking a plan and focus.

Luckily for me a sisterhood of like-minded young women, a sorority named Delta Gamma, took a chance on this young girl and day by day helped me find my way in the world and on a large university campus lined with azaleas, roses, magnolias, and towering trees of green.  I found a group of women who accepted me.  For one brief year of my life I was becoming Just Me, not reliant on being the pro's daughter or someone's girlfriend.

I learned how to budget my $5.00 weekly allowance and treated myself to French market donuts from time to time, a paisley scarf from Tiger Town (campus corner), one yellow "A" lined dress from a Baton Rouge department store bought through a lay-a-way plan, and my first record album--Sgt. Pepper's Lonely Hearts Club Band.  The French market donuts still come and go on my hips; the paisley scarf is gone but others now hang in my closet and on my shoulders; and that Beatles album is still with me, presently at my side, faded and worn, just like I am.

And now I'm 64 and still sing the songs I learned that fall of 1967.  When my family celebrated "birthday greetings with a bottle of wine" last week we all sang the lines:
When I get older losing my hair, 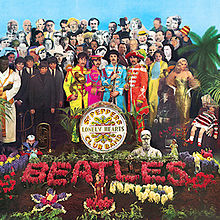 Many years from now,
Will you still be sending me a valentine
Birthday greetings bottle of wine?

If I'd been out till quarter to three
Would you lock the door,
Will you still need me, will you still feed me,
When I'm sixty-four?
From our youngest member Corey to my husband Jack, we've all lost some hair or watched it gray and from time to time dreamed of staying out till a quarter to three:
You'll be older to, (ah ah ah ah ah)
And if you say the word,
I could stay with you.
Along the way these last forty-four years I've made enough good choices to off set the "heavies."  Three grown capable children and a grandson and grand dogs have come our way.  My journey now is with my husband at my side, like the lyrics saw:
I could be handy mending a fuse
When your lights have gone
You can knit a sweater by the fireside
Sunday mornings go for a ride.
How many stories have I already written with this thought:
Doing the garden, digging the weeds,
Who could ask for more?
Will you still need me, will you still feed me,
When I'm sixty-four?
Unlike the Beatles I'd rather rent a condo in sunny California, Arizona, or the Gulf of Mexico:
Every summer we can rent a cottage
In the Isle of Wight, if it's not too drear
We shall scrimp and save
Grandchildren on your knee
Isaac, Chuck, and Dave
I knew when I met him that I loved him more than I dreamed possible, but was that enough with a family to raise?
Send me a postcard, drop me a line,
Stating point of view.
Indicate precisely what you mean to say
Your sincerely, Wasting Away
We filled in a form July 30, 1983 in Las Vegas that read "Mine for evermore:"
Give me your answer, fill in a form
Mine for evermore
Will you still need me, will you still feed me,
When I'm sixty-four???

So here we are at 64 and 65, and it's getting better all the time with a little help from our friends., 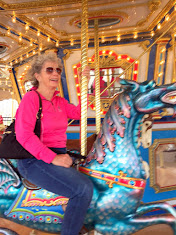